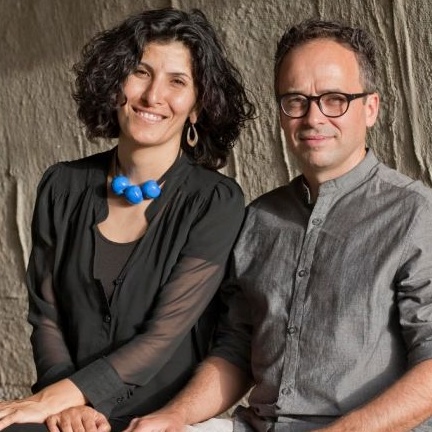 Sandi Hilal and Alessandro Petti are co-directors and co-founders of DAAR (Decolonizing Architecture Art Residency) in Beit Sahour, Palestine. The company aims to combine an architectural studio and an art residency, gathering architects, artists, activists, urbanists, film-makers, and curators to work collectively on the subjects of politics and architecture.

DAAR’s work combines conceptual speculations and pragmatic spatial interventions, discourse and collective learning. It explores the possibilities for the reuse, subversion and profanation of actual structures of domination: from evacuated military bases to the transformation of refugee camps, from uncompleted governmental structures to the remains of destroyed villages.

Sandi Hilal and Alessandro Petti have, over the past ten years, developed a research-project based artistic practice which is both theoretically ambitious and practically engaged in the struggle for justice and equality. They founded Campus in Camps, an experimental educational programme hosted in Dheisheh Refugee Camp in Bethlehem aiming to overcome conventional educational structures by creating a space for critical and grounded knowledge production connected to greater transformations and the democratization of society. Campus in Camps has today offshoot in other Palestinian camps and is linked in a consortium with universities around the world. In 2007, they founded DAAR (Decolonizing Architecture Art Residency) with Eyal Weizman in Beit Sahour, Palestine, combining an architectural studio and an art residency to gather architects, artists, activists, urbanists, film-makers, and curators to work collectively on the subjects of politics and architecture.

In 2018, Sandi Hilal and Alessandro Petti published their newest book, Permanent Temporariness. Since their first work and throughout their more recent architectural interventions in refugee camps, the artistic practice of Sandi Hilal and Alessandro Petti has explored and acted within and against the condition of permanent temporariness that permeates contemporary forms of life. In their ambitious research and project-based practice, art exhibitions are both sites of display and sites of action that spill over into other contexts: built architectural structures, the shaping of critical learning environments, interventions that challenge dominant collective narratives, the production of new political imaginations, the re-definition of words, and the formation of civic spaces. This book is organised around fourteen concepts that activate seventeen different projects. Each project is the result of a larger process of collaboration and is accompanied by individual and collective texts and interviews that contextualise and expand the reach of every intervention.