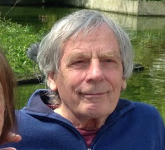 In 1967, Luud Schimmelpennink became a member of the City Council in Amsterdam. He wanted to make available 2000 collective bikes, to reduce cars in the city, and with that to reduce the air pollution and parking problems. After this idea was turned down by the City Council, he worked on the ‘Witkar’, a small electric car with the purpose to be shared by the citizens of Amsterdam. With this idea, he became the founder of the concept of sharing mobility.

Luud Schimmelpennink will speak during the break-outsession Car(e)free Cities on Wednesday the 19th of June.